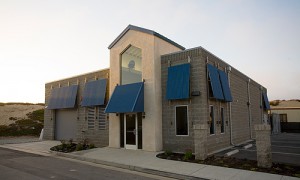 Background:
Sand City is one of a number of Monterey Peninsula cities impacted by limited water resources. Regional efforts to address this issue have encountered difficulties, both financial and political, for more than twenty years. Due to this historic lack of progress, Sand City decided to implement its own water project in cooperation with this region’s public water utility – California American Water Company. The potable water produced by this project will serve the current and future development and redevelopment goals of the City of Sand City.

Project Details:
The project is a 300 acre-foot per year (AFY) reverse osmosis (RO) desalination facility; or more specifically, a brackish water treatment plant. The system includes 4 brackish water feed wells, a concentrate disposal well and associated pipelines and appurtenances. The project has been in the planning and development since the late 1990’s as a method of providing the City with a source of potable water independent from the Monterey Peninsula supply. Sand City’s current needs are only 94 AFY, so the remaining 206 AFY will be for future development, redevelopment, and use as specified in the City’s General Plan, Redevelopment Plan and Local Coastal Plan.

The project design includes features to avoid adverse environmental effects to coastal resources, including marine organisms, groundwater supplies, and sensitive habitat areas. The capacity of the facility will allow for recovery and fresh water recharge of the shallow, brackish groundwater aquifer. In addition, “reject” water (concentrate) from the treatment facility will not exceed the approximate salinity of seawater, and will be very similar in chemical composition. Injection of the concentrate in a below sea-level horizontal well beneath the coastal bluff will not substantially alter the existing, naturally-occurring seawater/freshwater interface, or result in localized salinity increases in the Bay.

The City acquired consultant services through a competitive bid and interview process for the design/build of the desalination treatment facility. The City was also awarded $2.9 Million in California grant funding through Proposition 50.

Operation/Maintenance:
In order to provide maximum operational efficiency and minimizing expenses, the City has arranged a lease and management agreement with the California Water American Water Company. In the course of time, Cal-Am will utilize water produced from the desalination plant to offset their current over drafting of the Carmel River and Seaside Aquifer. As redevelopment in Sand City progresses, the City will re-coop use of that water as needed.